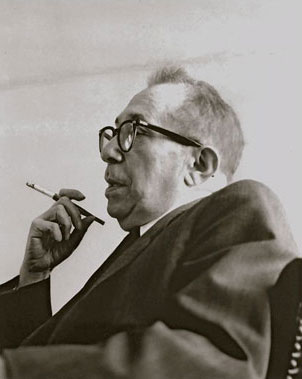 The Leo Strauss Center seeks to promote the serious study of Leo Strauss’s thought primarily through the preservation and publication of the unpublished written and audio record that he left behind.

Leo Strauss is increasingly recognized as one of the most important thinkers of the twentieth century. His research stimulated significant developments in the study of ancient and modern political philosophy, American political thought (especially the founding), classics, Jewish studies, and Islamic studies. He is widely known for defending natural right, especially in its classical form, against the challenges of relativism and historicism, reopening the quarrel between the ancients and the moderns in political philosophy, emphasizing philosophy as a way of life, sharply criticizing value-free social science, stressing the centrality of the theological-political problem, and distinguishing between the exoteric and esoteric teachings of writers of the past. Strauss published penetrating interpretations of writings by a wide range of figures, poets as well as philosophers, including not only Plato, Aristotle, Thucydides, Marsilius of Padua, Machiavelli, Hobbes, Spinoza, Locke, Rousseau, Burke, Nietzsche, Weber, and Carl Schmitt, but also the Bible, Aristophanes, Xenophon, Lucretius, Al-Farabi, Judah Halevi, Maimonides, Lessing, Moses Mendelssohn, Herman Cohen, and Heidegger. Numerous scholars have responded to Strauss’s challenging interpretations of fundamental texts. A selected list (which is regularly updated) of such works can be found on this website under “Life & Thought.”

The Leo Strauss archive in the Special Collection Research Center of the University of Chicago library holds an estimated 25,000 pages of unpublished material, including correspondence, manuscripts and typescripts of lectures, papers, and notes. A summary guide to the collection can be consulted online. An extensive record of Strauss’s teaching exists in the audio recordings of many of his classes, transcripts made from the tapes, notes compiled by students of his classes, and in some cases Strauss’s own class notes. Partial or complete sets of tapes for 44 courses have survived. All of the extant audio recordings and many of the transcripts are now available on the Center’s website. At the conclusion of this project the transcripts of all 44 courses will be made available through this website. Transcripts published in print will be made available two years after the publication date.

The efforts to preserve and prepare for publication the unpublished Strauss audiofiles and transcripts began in 1998 under the supervision of Professor Joseph Cropsey, then serving as the literary executor of Leo Strauss. Transcripts were word processed and surviving audio files were digitally remastered by Craig Harding of September Media, with support from the John M. Olin Center for Inquiry into the Thepry and Practice of Democracy at the University and a grant from the National Endowment for the Humanities. The Leo Strauss Center, established in 2008, then administered by Stephen Gregory, launched a project to correct the original transcripts based upon the remastered audio files, transcribe audio files not previously transcribed, and annotate and edit for readability all the transcripts. This project is supported by grants from the Winiarski Family Foundation, and contributions from numerous individual donors. The Strauss Center also wishes to acknowledge the assistance of Nina Botting Herbst and Patrick McCusker, development staff in the Office of the Dean of the Division of the Social Sciences at UChicago.

The Leo Strauss Center actively seeks funding for the completion of its projects.

Read about the Leo Strauss Center in the Wall Street Journal: “Leo Strauss: Back and Better Than Ever.”

Use of the audio and text files published on this website is available only for non-commercial, personal, educational use. Any other use, which is not permitted in accordance with the principle of fair use, requires the permission of the Estate of Leo Strauss.

All of the audio and text files published on this website are © 2017 Estate of Leo Strauss.